Ever since Israel struck back in the last two weeks at Hezbollah and Palestinian terrorist groups that have kidnapped Israeli soldiers and kept up an incessant barrage of rockets and missiles upon Israel from Gaza and southern Lebanon, various governments have criticized Israel's response as
"excessive"' and "disproportionate."

EU foreign policy chief Javier Solana speaks of "disproportionate use of force by Israel," adding that "imposition of an air and sea blockade on Lebanon cannot be justified." Russian Foreign Ministry spokesman Mikhail Kamynin concurs: the "disproportionate use of force by Israel, which causes suffering to the civilian population, can be neither understood nor justified."

Additionally, a draft resolution in the United Nations Security Council calling for an end to Israeli military action and Israel 's allegedly "disproportionate use of force" received 10 affirmative votes and four abstentions and only failed because it was vetoed by the US, the only country to vote against it.

Although several of Israel's critics have said Israel has a right to self-defense, they have not even hinted in which ways Israel should exercise it, except urging it to desist from its current military operations.

Proportionality is defined by the military objective, not the strength of the original aggression. For example, the unprovoked Japanese assault on Pearl Harbor did not limit America in its response to sinking a dozen Japanese warships and killing 2,500 Japanese, the size of the American losses sustained at Pearl Harbor. The US was entitled to wage unremitting war upon Japan until it achieved its objective, which was to have Japan relinquish its dreams of conquest and deprive it of the means to wage war on America - which is precisely what President Franklin Roosevelt did.

Therefore, if Hezbollah attacks Israel, as it has done here, it would be absurd to claim that Israel may return fire with only one bullet or one rocket or one artillery shell for each fired at it. Yet, in criticizing
Israel for being disproportionate, this is essentially what its critics are saying.

All countries possess the right and duty of self-defense and the protection of their citizens from armed assault from external forces under Article 51 of the UN Charter. If Israel, as in the present case, is under such attack, proportionality means it can respond militarily with whatever use of force
is reasonably required to deal with the assault to eliminate the danger and prevent its recurrence.

Hezbollah fields some 5000 heavily armed men and 13,000 missiles pointed at Israel, over 2000 of which have already been fired, killing scores of Israelis and wounding hundreds more. Iran may also have an additional 1000 men fighting with Hezbollah. In short, this is a well-integrated fighting
force, not a rag-tag outfit. Israel's offensive is therefore geared towards eliminating the Hezbollah missile threat and eliminating it as a fighting force. Accordingly, it has attacked Hezbollah's capacity to import weapons (bombing airfields and highways, blockading ports) and targeted its installations, missile launchers and command centers, many of which are located in Shiite residential areas in southern Lebanon.It is a war crime to embed military forces, arms caches and missile batteries among civilians, as this endangers them in any hostilities - yet that is precisely what Hezbollah has done. The consequent Lebanese civilian casualties, which are inevitable in such a situation, no matter what efforts Israel makes to avoid harming them, are therefore the responsibility of Hezbollah. Yet Israel's critics completely ignore this fact and invoke a spurious criterion of proportionality to hold Israel guilty for the consequent civilian deaths. That is evidence of dishonesty, legal and moral.

Hezbollah, an organization whose head, Sheikh Hassan Nasrallah, has repeatedly called for "Death to America" now promises a "new stage" of attacks on Israel not limited to Haifa. Already in 2002, Nasrallah indicated genocidal ambitions, saying, "If they (Jews) all gather in Israel, it will
save us the trouble of going after them worldwide."It would be hard to imagine any other country that, confronted with an armed force dedicated to its destruction and launching deadly assaults on its
population centers from across the border, would not respond immediately and in force to eliminate the aggressors and the possibility of a repetition. In fact, the biggest surprise is that Israel waited for six years during which time she endured endless threats, the kidnapping of Israelis and
incursions across the border before finally acting after the latest kidnapping of its soldiers. This was a most unusual forbearance by any nation. Yet Israel's critics, in effect, are saying that Israel, uniquely
among nations, should not respond even now.

The claim that Israel is behaving excessively or disproportionately because more Lebanese than Israelis have been killed or because Israel has used more firepower than Hezbollah is false as a matter of law, history and morality.

The UN and Hezbollah flags fly side by side

A very interesting opinion article from Australia's largest newspaper, with the opinion well documented. Click on the links in the text to read the relevant documents that give a very different view of what happened and why. Why have we not seen this in the Dutch papers?

Kissing cousins: The UN and Hezbollah flags fly side by side at the UN observer post. (Pic thanks to Michelle Malkin <http://michellemalkin.com/>)

The lynching of Israel continues, this time with United Nations boss Kofi Annan accusing it of the "apparently deliberate targetting <http://www.jpost.com/servlet/Satellite?c=JPArticle&cid=1153291996858&pagename=JPost%2FJPArticle%2FShowFull>"
of a UN observation post, killing four observers. The usual suspects are now running with this line, with The Age front page screaming: "UN told: please explain.'' The venom against Israel - as splashed about by former Deputy Prime Minister Tim Fischer on ABC 774 this morning - is extraordinary. Do these people seriously think Israel aims to kill UN staff, and that this was not simply - as Israel insists - a tragic mistake?

What makes Annan's allegation so unforgiveable is that his UN Interim Force in Lebanon has been warning for days about what almost certainly caused this tragedy. Hezbollah fighters, who have already been firing behind screens of women and children, have also been shooting from behind and next to the UN positions, presumably hoping Israel will not dare shoot back and risk exactly this kind of propaganda disaster.

We received emails from him a few days ago, and he was describing the fact that he was taking fire within, in one case, three meters of his position for tactical necessity, not being targeted. Now that's veiled speech in the military. What he was telling us was Hezbollah soldiers were all over his position and the IDF were targeting them. And that's a favorite trick by people who don't have representation in the UN. They use the UN as shields knowing that they can't be punished for it.

At the same time, he questioned why the UN had manned the outpost in Lebanon near the Israeli border as bombs exploded all around.

"We want to find out why this United Nations post was attacked and also why it remained manned during what is now, more or less, a war during obvious danger to these individuals," he told reporters.

by ALAN M. DERSHOWITZ in : The Christian Science Monitor

CAMBRIDGE, MASS. (CSM) - Sometimes an apology can be quite revealing. Consider the one recently issued by Hassan Nasrallah, the leader of Hezbollah. He apologized to the families of two Israeli children who were killed by a Hezbollah rocket that hit the Christian holy city of Nazareth. He called them shahids, martyrs, even though they did not choose to die at the hands of Hezbollah terrorists.

The apology was issued not because they were children or innocent bystanders, but because they were Israeli Arabs and not Jews. Hezbollah's rockets are aimed at Jews, and earn cheers whenever they kill a Jewish baby or grandmother. No apologies there.

The so-called Arab-Israeli conflict represents the first instance since the Holocaust that Jews, as Jews, are being specifically targeted by an international organization that seeks recognition as a legitimate power. Hezbollah has threatened to attack Jewish targets outside of Israel as well. And they have proved their willingness to do so, as evidenced by their attack on a Jewish Community Center in Buenos Aires, in 1994, in which they collaborated with Argentine neo-Nazis to murder many Jews, including children.

The Grand Mufti of Jerusalem, Haj Amin al-Husseini, who was recognized as the official leader of the Palestinians during this period, was a virulent anti-Semite whose hatred of Jews was both religious and racial. He became a close ally and adviser to Adolf Hitler, and an active supporter of the "final solution," the mass murder of European Jewry. In 1940, he asked the Axis powers to settle the Jewish problem in Palestine in accordance with the "racial interests of the Arabs and along lines similar to those used to solve the Jewish question in Germany." He urged Hitler to extend the final solution to the Jewish refugees who had reached Palestine, and he advised Hitler, in 1943, when it was well known what was happening in Poland's death camps, to send the Jews to "Poland, in order thereby to protect oneself from their menace."

Husseini rejected the two-state solution, arguing that Palestine was part of Syria. He objected to any Jewish state, even one the "size of a postage stamp," on Islamic holy land. He wanted all of the Middle East to become judenrein (free of Jews). Husseini's heir was Yasser Arafat, a cousin who also targeted Jews, through his surrogate terrorist groups. When a young student at the Hebrew University was gunned down while jogging through a mixed neighborhood of Jews and Arabs in north Jerusalem in 2004, the Al Aqsa Martyrs Brigade, a wholly owned subsidiary of Arafat's Fatah movement, joyously claimed credit for killing yet another innocent Jew. When it was later learned that the jogger was a Jerusalem Arab and not a Jew, Al Aqsa quickly apologized to the family, calling it an accident.

This is anti-Semitism, pure and simple. And despite efforts by supporters of Palestinian terrorism to justify the murder of innocent civilians as national liberation or by any other euphemism, these selective apologies prove Islamic terrorists' targeting of Jews is little different in intent from other forms of exterminatory anti-Jewish murders.

And yet Kofi Annan, the secretary-general of the United Nations, Louise Arbour, the high commissioner of human rights at the U.N., and many within the European Union are condemning Israel for its reasonable military actions to prevent these racist murders. They insist that there is a moral equivalence between the anti-Semitic targeting of Jews by Hezbollah and the defensive actions directed by Israel at military targets.

Hezbollah's goal is not the "liberation" of Palestine. Its members are not Palestinian. They are Islamic extremists who want to "liberate" all Islamic land, which includes all of Israel proper, including Tel Aviv, from the "crusaders," a term that includes Jews and Christians (even though Jews were among the victims of the Crusades). The fight against Hezbollah is a fight against anti-Jewish, anti- Christian, and humanistic values. If Hezbollah terrorism is not stopped in southern Lebanon, it will be coming to a theater, church, or synagogue near you.

Alan Dershowitz is a professor of law at Harvard University. He is the author of, most recently. "Preemption: A Knife That Cuts Both Ways." 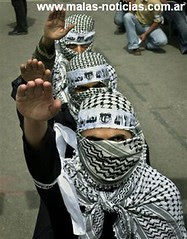