A Palestinian funeral in the Netherlands

Margriet Teders (91), pro-Palestinian activist since the late sixties, passed away last week. We know Margriet as the old lady who kept asking for a signature "Against the Wall". Responding by telling her that I wouldn't sign, as I am a "zionist", did not have any effect. An hour later, she would ask again for a signature.

Gretta Duisenberg
During the funeral we observe the pro-Palestinian community, as if we are the FBI during a Soprano-maffia movie. Who belongs to whom?  Who is the capo di tutti capi? On the left, we can see the widow of former European bank chief Wim Duisenberg, Gretta. She was an activist on a high international level. As an activist with access to diplomats and governments, she would meet Iranian members of parliament, during the campaign "March to Jerusalem". The large ego of Gretta Duisenberg and her arrogance  prevents her from maintaining a good Dutch network. Her website is governed by the pro-Syrian Sonja van den Enden. Meetings or demonstrations are no longer organized by her "Stop de Bezetting"-organisation.

Anja Meulenbelt
The last two years, Anja Meulenbelt was no longer seen in pro-Palestinian demonstrations. She is trying to found an intersectional left wing party, called BIJ1, together with the Black-Pride activist Sylvana Simons and the ultra left wing, pro-Hamas, Internationale Socialisten. During the visit of Palestinian leader Yasser Arafat to Amsterdam in 1998,  Anja Meulenbelt was sitting next to him, instead of the official Palestina Komitee board.

Hamas influence
From 1969 until 2002, the pro-Fatah organisation Palestina Komitee was dominating the pro-Palestinian movement in the Netherlands. One of the slogans of the seventies and eighties was, to recognize the PLO as a negotiator and representive  of the Palestinian people. On the picture above, we dont' see a lot of official board members of the Palestina Komitee. The wife  of Ibrahim Al-Baz (board member of PKN), in the middle, with the veil, is the only PLO-connected visitor of the mourning ceremony.

Amin Abou Rashed
The first representive of Hamas and member of international Muslim Brotherhood, Amin Abou Rashed, is sitting  in the fourth row in the middle. He published an  official Commemoration of Margriet Teders on his Facebook page. (see below)

Honoured by Hamas
During an Hamas demonstration on Amsterdam Dam square, on 16 July 2017, Amin Abou Rashed honoured several pro-Palestinian street activists. Margriet Teders was one of them. Jan Wijenberg was mentioned already. Dorien Ballout-Siemons was present at the funeral. (Right side wall). Simon Vrouwe took pictures during the funeral.

The growing influence of Hamas- and the declining mobilisation of the PLO and of the Palestina Komitee is clearly visible on the picture. Hamas is present in the streets of the Netherlands. Several Syrian refugees, from Yarmouk camps in Damascus and from other places in Syria, join the Hamas- structures in the Netherlands and are assigned to important positions. The Dutch activists in the streets are more inclined to cooperate with the visible authentic Arabs, then with old Dutch study room intellectuals, who prefer writing analytic articles about the Middle East.

The position of Palestinian president Abbas and  the PLO is also influencing the debate in the Netherlands. The armed forces of the PLO have to coöperate with the Israëlis IDF and the Israeli government, to stay in power. This reality on the ground is not inspiring Dutch anti-Israeli activists. 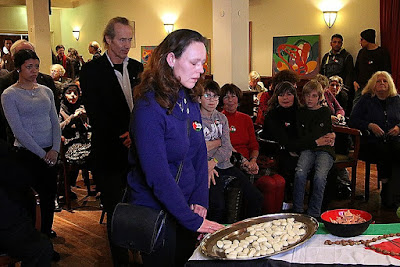 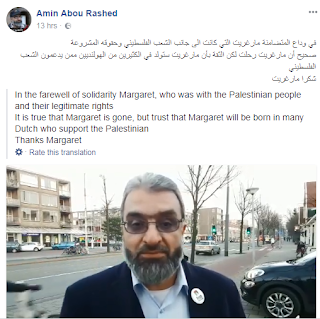 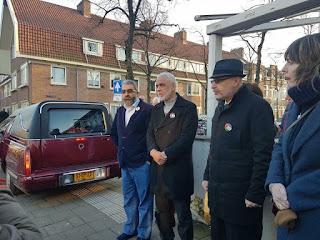